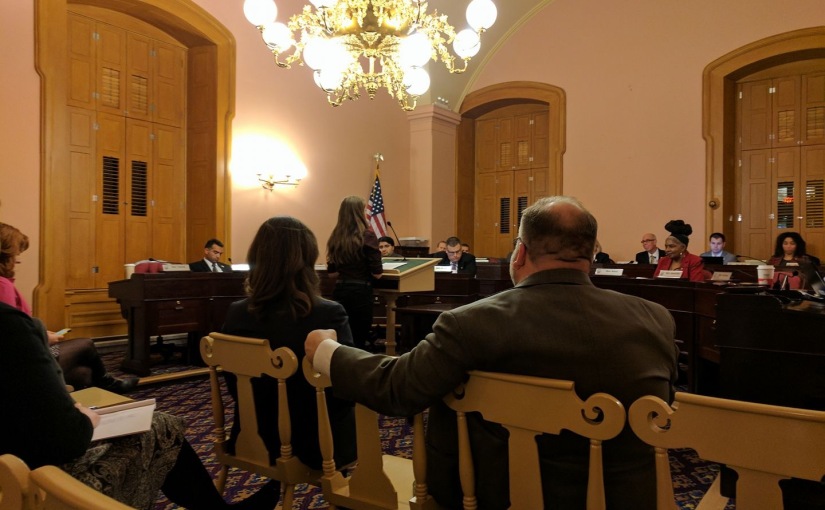 My name is Tess Stuber, I’m a junior in high school and I am standing here today to urge you to say no to the Pastor Protection Act. In every history class I have taken, we have discussed the monumental moments in history that stay with people forever. The moments where you can remember exactly what you were doing and how you heard the news. For some people that’s July 1969, when we put the first man on the moon. For many, it’s September 2001 when thousands of lives were so tragically lost. For me, it’s June 2015. When I was finally given the right to get married and have a family, nationwide.

It was June 26th, a Friday, my dad’s birthday and we were on vacation. I woke up to a flood of notifications on my phone. That day made history. It took much longer than it should have, but it still felt amazing to know that we had finally achieved what we have been fighting for since 1924 when the first gay-rights organization was created. I can close my eyes and picture exactly where I was laying in bed in our hotel room and I can feel the pain in my cheeks from smiling so hard upon hearing the news. I can feel the tightness in my chest from the squeals of excitement I struggled to contain. But our fight is not yet over.

I am here today because we, the lesbian, gay, bisexual, transgender, and queer community, are not done fighting for equality. You can look at the history of the gay rights movements and see that we are long overdue for the equality that we deserve. Being gay was not removed from the list of mental disorders until 1973, and “civil unions” between gay and lesbian couples were not recognized until 2000. Even then, it was only in one state, Vermont, and they wouldn’t call it a marriage. The Pastor Protection Act seeks to take away our fundamental rights that we have fought so hard to finally receive. This bill is moving backward toward inequality instead of acceptance, despite the recent progress we have made nationwide. Legislature like this tries to solve problems that do not even exist which results in only creating a greater divide from our community. Couples that wish to have their marriage officiated by their religious figures do so because they have a special connection with their faith and with that person so they already know them well. A couple would not ask their pastor, rabbi, or whomever, to officiate their marriage if they know that they are not accepted there. Our community would not go out of their way to ask someone that is not accepting because it would only create problems. That is what this bill does, it goes out of the way to cause a problem where one does not exist. This bill will do nothing but prove that we as a community are not accepted, and we are not equal.

On behalf of myself and the rest of the LGBT+ community, I urge you to say no to this bill that opens up a door to more discrimination and inequality in an already unfair and unjust world. We have fought long and hard to gain the rights we currently have. Not once have we stopped fighting. Not during the riots of 1969 at the Stonewall Inn, and not now. We have persisted toward legislation that gives us our basic human rights and protects us from hateful, unlawful, discrimination. The Pastor Protection Act tears down what we have worked so tirelessly to achieve. Our fight for equality is far from over. But by saying no to this bill, you are choosing love over hate and proving that Ohio, and America will fight the discrimination and unjust treatment of those who are different from you. I truly hope that you will take this into consideration. Thank you.