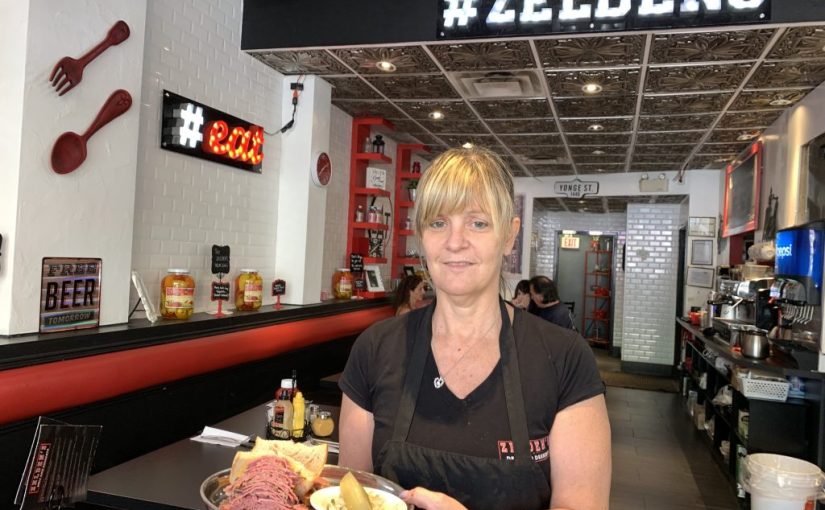 After taking over the family deli business, Irene and Shelley Zelden moved to the St. Claire area to open up a pub and a deli across the street. Although their pub has been around longer, the Zelden’s passion is in the deli business and this place is as close to them as family.

Zelden’s Deli & Desserts is a cross between a restaurant and a deli, bringing deli meat into their recipes and putting a modern spin on traditional deli sandwiches. Their sign reads “the evolution of deli” as they work to incorporate non-traditional items into their menu. This family-owned business is making a name for themselves with house-made classics like the pastrami sandwich and homemade spicy mustard that’s so good it was being stolen off the tables. The menu also features their evolution items such as strawberry cheese blintzes and stuffed challah grilled cheese.

When did you begin thinking about the deli business?

We had a place in Thornhill in the 80s that we sold in 1989. And then in between that, we had a few other places, pubs and restaurants, but deli was always our passion. So when this location came up, we decided to jump on it. We live in the area. We have another business in the area, the Jester on Yonge and it’s directly across the street. We have been there 15 years and we’ve been here just over two years and that’s been going good so far.

What were your original motivations in getting started with this place and starting the place across the street?

That’s kind of what we do. We’ve always been in the restaurant business.

Did you choose this location for any particular reason?

It’s right in the center. When we were looking to buy a restaurant or to acquire a business we went from the East end to the West and North and South and we kind of ended up right here in midtown right in the middle, which worked perfect for us. We came from the suburbs and we both really liked the city so we moved to Yonge and St. Clair when we bought the Jester.

When you first got started, what were some of the biggest challenges that you faced?

Mostly awareness, just getting people to realize that we’re new and we’re here. This unit has had many restaurants in it that haven’t succeeded. So we had to get over that because sometimes it’s the address or the location that kind of has a bit of a stigma, right?

What do you love specifically about this location as opposed to some of your other locations or businesses that you’ve had?

I built and started this one with my husband from scratch from the bottom up with no other influences, just us. It’s sort of our baby. You know, it’s our thing. The one in Thornhill was my husband’s family business. His mother became sick and we ended up having to sell the restaurant in Thornhill. People still walked in here remembering it because it was called Zely’s Deli and we’re Zelden’s deli. So people still walk in here recognizing the name and us because we were at the deli all the time.

Where did the style come from?

How would you describe the environment?

It’s very comfortable in here. And I’ve had customers, like single women that come in and actually say that they feel very comfortable coming in, you know that to a place on their own. This is very comfortable here. We are a very family business. We’re not corporate at all. We like to know that people know that the owners are here and we run the place, you know, and we’re very hands-on. My staff likes it too. I’m not like an owner that just walked into the kitchen and they don’t know what they’re talking about. It’s worked out really well here.

Who are the main cooks?

My husband doesn’t cook. He’s on the meat slicer. I’m the main cook and then I’ve got three or four other cooks with me. They’re all self-sufficient now because they worked here for two years, but I taught them all the recipes.

How much trial and error did you have when you started making the menu? Where did the ideas come?

Most of it came from my mother in law and the original Zely’s so I really already had all my recipes and knew the direction we were going to go with everything. Except we’ve added like an evolution sort of twist to our menu by doing deli meat pasta, quesadillas and stuff where we’ve infused our deli meats. We just thought you know, just to be a little bit different than anybody else.

How often does your menu change?

It’s pretty consistent. If it does change, it’s very minor. We do the evolution stuff which is new stuff that you wouldn’t see, but we also stuck with really traditional stuff as well like the beef knish and matzah balls and Kishka and potato latkas. All that is made in house except for the kishka.

What are your most popular items?

I want to say our pastrami because we do our pastrami in house and we have a special dry rub that you can’t get anywhere else. So if you like our pastrami, you can only get it here. We have so many popular dishes. The reuben is also one of our top sandwiches. And then we do also our steak sandwich, which is really one of our favourites as well.

What would you say is your biggest source of income?

Right now I think (the restaurant and catering) are pretty much hand in hand. Our lunch trade and our brunch trade are pretty much the busiest times of day. The weekends are the busiest. We have a unique brunch menu, that’s why. There’s a lot of stuff on our brunch menu that other places don’t do like our breakfast nest, our breakfast “Zkillet”, our cinnamon roll pancakes and our strawberry cheese blintzes.

So what’s next? What are the future plans?

The evening business and the catering are two things that I would really like to concentrate on building. (The catering) has been picking up in the last few months. We only have 40 seats so you can really only do so much with a space this size. In order for us to really be out there and get our name out, we go to offices and cater. People order trays for home and stuff too.